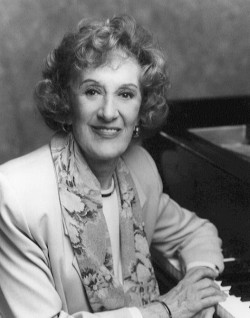 Thursday night brought out the jazz geeks, mostly to see jazz legend Marian McPartland. She’s the only performer I’ve seen to get a standing ovation before the performance began. Though 87 years old, you couldn’t tell it from her energetic piano play or witty demeanor. She was accompanied by a cellist and drummer, who got to play impressive solos.

I really enjoyed the preformace, and just as I was trying to put my finger on the difference between jazz and classical piano playing, McPartland slipped a classical music sequence into one of her jazz pieces. It made for a nice constrast, and she later said it was the only classical music she remembered from school.

The second half of the evening featured Dee Dee Bridgewater, an American singer who’s been living in France for 20 years. The songs were a mix of French and English, and the French bandmembers were entertaining. Unfortunately, it wasn’t quite the thing for the Marian McPartland fans, some of whom started leaving early.

Celebrity sighting: Various teachers and former teachers from the NC School of Science and Math.

Japanese violinist Midori (Goto) performed with pianist Charles Abramovic last night. (I didn’t catch the name of the other performer — the guy turning the pages for the pianist.) She’s apparently a world-class violinist, and we overheard someone at intermission explaining how they’d been trying to see a Midori performance for years. The crowd was near sell-out and was very pleased with the performance. Midori was energetic with her whole body and produced sounds from the violin I never expected.

Bonnie and I mused about how much of the performance is skill and how much is art. Certainly it takes an incredible amount of skill to play so well. Surely there must be an art component, too, but I would probably have to see other violinists perform the same pieces to recognize the art component. Later, I read through the “Random Thoughts” section of Midori’s web site where she explains the importance of a performer’s interpretation of a work.

I don’t know if I had a clue or or it was something else, but I mentioned to Bonnie how the piano sounded sort of dull in the first set, and then we saw some guy spend the entire intermission tuning the piano. Maybe it just required a different sound for the rest of the concert, or just maybe I know what I’m talking about …

We unfortunately missed DJ Spooky and Los Lobos while on vacation. We gave our tickets to friends who said both events were very good.

Friday night we saw Tift Merritt and Nanci Griffith. I have to admit I’m not a big fan of music with so much “twang” in it. Nor do I like sit-down popular-music concerts for two reasons: you can’t move around like at a club and live music isn’t mixed as cleanly as a studio production, so you can’t make out the lyrics as easily, for instance (though if I were a real fan I’d know all the lyrics already). Nonetheless, both half-concerts were well done and enjoyable.

Tift Merritt got off to a rocky start. The band entered the unlit stage and Tift walked right off the front of it and fell about four feet. She jumped right back up and got to the music, after suggesting that the auditorium provide lighting next time when the banding is walking out. After attending classes at UNC (and almost graduating), she was obviously excited about playing at Memorial Hall and added a couple of local interest anecdotes to her performance. The band was very good with several impressive instrumental stretches. Merritt herself showed her musical range by alternating between guitar, harmonica, tambourine and piano.

In constrast to the “cross-over country” of Tift Merritt, Nanci Griffith’s portion of the concert was pure “activist folk” music. Every song had a story about who wrote it and when and why and who often performed it. Unfortunately, the live performance mixing that obscures lyrics is doubly harsh to folksingers, who so value the lyrics. 50-something Griffith came across as an old pro confident enough to spread credit and the spotlight to the rest of her talented band.

Both performers noted how quiet the crowd was. I don’t know if was the venue (the sit-and-watch seating), the reserved audience (maybe the “wine and cheese crowd” from the Dean Dome) or the disparity of the performers (splitting the audience between young and old or between country and folk).

Our second show of the performing arts series was tenor Ian Bostridge and pianist Julius Drake performing Shubert pieces. I can’t decide if I would have liked it better if the singing was in English or not. Being in German, it was sort of like a fancy, solo Gregorian chant to me. Nonetheless, I found it captivating. Between the piano and the singing, there was always something of interest to focus on, and sometimes the combination seemed to put me into some sort of trance.

The program included printed lyrics, both in German and English. I didn’t bother trying to follow along, but most people did. At least they tried to. At one point, there was the sound of a few listeners turning the page of the lyrics sheet. Then a few seconds later, there was a much louder sound of many listeners turning the page. I figure the late turners must have lost their places and took a cue from the early turners. Then again, maybe the early turners were just the quick readers.

Bonnie didn’t enjoy the performance as much as I did (which wasn’t a whole lot), so we left at intermission. Other notes: Bostridge was very pale in the lighting and the way he clutched at the piano for support, you wondered if he was going to feint. He looked startled when rain could be heard as a thunderstorm passed — you could see him look to the piano in wonder until Drake quietly indicated that the sound was just the rain and that it was OK to continue. It must have sounded louder on stage.

Not sure what the clapping protocol is for these kinds of performances. For a while, no one clapped during the brief lulls between pieces, but later they seemed to clap more readily. Maybe the rest of the audience didn’t have a clue either.

To celebrate our tenth wedding anniversary, Bonnie and I got season tickets for the Carolina Performing Arts Series at the newly renovated Memorial Hall at UNC. We don’t see a lot of performance art, so it will be a good chance to see new things. My only previous experience at Memorial Hall was a Steven Wright concert about 15 years ago. Anyway, I’ll try relating some of the shows we attend for the equally unsophisticated reader.

The first performance of the season was modern dance by Ronald K. Brown/Evidence. I was a little dubious at the outset of the first piece — the dancers were all wearing various Saturday-afternoon casual clothes and barely in sync with each other, but eventually I saw those as intentional effects. The subsequent dances switched to more traditional modern dance garb while maintaining the loose synchronization as an interesting theme. Loose synchronization is certainly not doing them justice; what I mean is that the seven or so dancers in each piece would usually dance in seemingly independent rhythms and yet sometimes come together perfectly for a series of synchronized moves.

I’m sure each piece had some holistic meaning as well, but such things are beyond me. All I could appreciate (besides the obvious physical talent and execution) was the creativity exuded from the performers and the choreography. Some bits of that: changing subgroups of dancers, dancers coming and going from the stage (sometimes returning with a costume change), angles of presentation, music selection, and occasionally background images.

And most importantly, they looked like they were having fun.